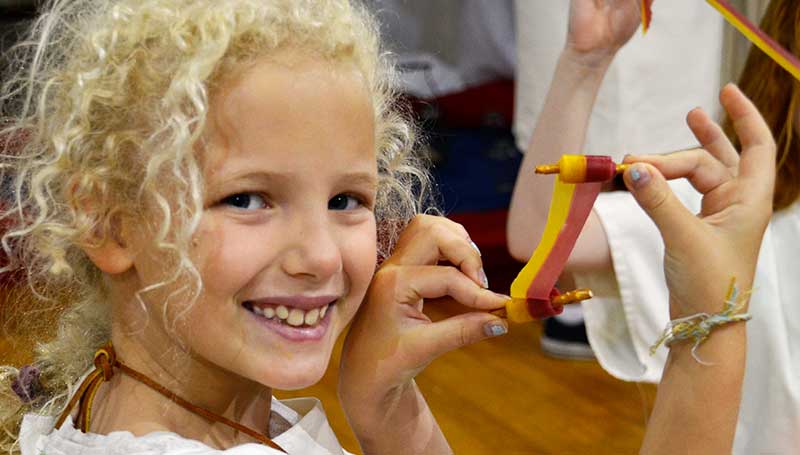 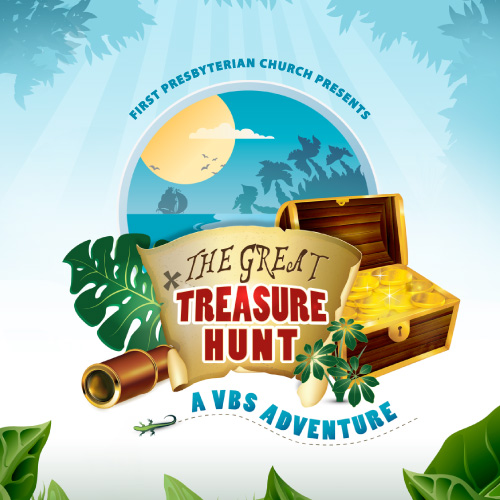 VBS in 2020 looks very different this year but it is the same in many ways. It is still geared toward engaging our children with the gospel of Jesus Christ. There are still fun songs, a decorated Sanctuary, loveable characters and a story to capture imaginations. There will still be crafts, games and treats. But it will be different because of the lengths that Children's Ministry is taking to protect our children, staff and volunteers from the threat of COVID-19. This year VBS is To-Go!

VBS To-Go gets both children and parents out of their houses and outside on a HUGE treasure hunt! VBS begins with worship on July 19 where the first clue will be issued. Solve the puzzle for the first clue to find Monday’s VBS location. Penelope Pirate and Princess Priscilla will be waiting at each location between the hours of 10 am and 12 pm, July 20, 21, and 22, for you to drive by and retrieve your clue for the next day. There are different outdoor locations each day of VBS. The final day will culminate with a large drive-thru party where there will be treats, bubbles, beach balls and best of all, the treasure we all seek.

So, this summer join the adventurous Penelope Pirate and her friend Princess Priscilla on a grand quest. Princess Priscilla is obsessed with all things that glitter and that includes her crown. When she suddenly loses her glittery head gear, she and Penelope Pirate set off to find the lost crown. Not only do they find her crown, but they discover an ancient treasure map! With the help of the wise Captain Phillips, they learn that all true treasure maps lead to real treasure and real treasure is something very different than expected.

Registration is not necessary.

The sky rumbled as if it were the stomach of a giant monster. The wind whipped and upset the water making rough waves. The air seemed super-charged and unsettled. A storm was coming.

Princess Priscilla hated storms but she wouldn’t admit it because princesses were supposed to be strong and brave. As she stared out at the ocean and watched the waves build higher and higher, Priscilla decided she had better run home and fast. It would not be good to be caught in a storm. Princess Priscilla grabbed her stuffed animal friend, Peter the Pig, and began to run.

The rain began to fall like huge globs of slime but soon the wind was so high that it pushed the rain sideways. Soon everything was soaked, including Priscilla. A large beach cave was up ahead and she ran to take shelter inside until the rain stopped.

“Who dares to enter the cave of the mighty Penelope Pirate?!” a voice rang out.

Priscilla gasped as she heard Penelope Pirate’s voice echo throughout the cave. She turned and out jumped Penelope in a bright red bandana and a crooked eye patch.

“Are you a REAL pirate?” Priscilla asked, voice quivering.

“Not yet! But I hope to be a real pirate soon. I’ve got a plan!” Penelope replied. “Who are you?”

“I’m Princess Priscilla and this is Peter Pig. There’s a storm outside and I’m scared!”

“You can hang out here with me! I have popcorn and pickles, but I wish I had pizza. It’s impossible to go home in all the rain though.” Penelope’s invitation warmed Princess Priscilla’s heart and she gladly took the cup of popcorn offered to her. It was only a few minutes later when the water started to rise.

The water had found a crack in the rock and from that little trickle was created a gush of water that reminded Princess Priscilla of the rapids at the water park. It was loud and terrifying at how fast the water began to rise. Penelope Pirate grabbed Princess Priscilla’s hand and tugged her with Peter Pig up onto a high rock to watch the water! A small opening at the top of the cave was their only hope, but they couldn’t reach it.

“HELP!” they both screamed at the top of their lungs. How would they ever get out?

Suddenly, they heard a loud ship’s horn and a rope appeared. Princess Priscilla grabbed onto it and climbed out with Penelope right behind her. They looked around and found themselves on a huge ship! It was a Royal Navy ship from the King and it was captained by the whimsical Captain Phillips.

“Hello, there! Are you both alright? You must be Princess Priscilla and Penelope Pirate,” said Captain Phillips, a distinguished servant in the Royal Navy.

“Yes! Thank you so much for pulling us out of the cave. It was scary!” replied Princess Priscilla.

“How do you know that I’m a pirate?” questioned Penelope.

“Because I am a servant of King Elyon and he sent me to lend you a hand. You see, he is a great king. He is full of wisdom and mercy. He sees things as they truly are and there is no deceit in him. He is a worthy king to serve,” explained Captain Phillips.

“And it was King Elyon who sent you to us?” questioned Penelope again.

“Yes. He is concerned about the little ones – like you – just as much as the big things which all kings must battle. I have been sent to guide you home, but first dry off and let’s share a snack of preserves on pumpernickel!” Captain Phillips whisked the girls into a cozy cabin, fed them and dropped them safely off at home.

1. That was a scary storm! How do you think Penelope and Princess Priscilla felt as they watched the water rise?

2. Who does Captain Phillips represent? Who does King Elyon represent?

All good pirates, as everyone knows, love adventure. A romp through treacherous pathways ending with a snack of pickles and popcorn is a good day, indeed. One particular morning, Penelope Pirate woke up with a sense that today wouldn’t be just any old day. This was the day she’d conquer the BIG FISH. Today, she would become a real pirate!

Penelope believed that she would have to do something amazing to prove that she was worthy to be called a pirate. If she didn’t she wouldn’t be accepted. For she had tried playing piano, but she always played wrong notes. She had tried painting pictures, but the paints bled together and her art ended up looking like a big, brown dot. She also tried planting petunias, but she always forgot to water the flowers. She didn’t fit anywhere, but today, she would prevail! This was her day. She was a pirate. Today, she would, could, and had to catch the great fish!!

This wasn’t just any fish; it was a whale! As long as the Eiffel Tower and as wide as the Mississippi River, this was the biggest fish told of in all pirate lore and no pirate had ever, ever caught him. Until today, of course. So, Penelope jumped out of bed, grabbed her fishing rod and climbed onto her little boat.

The morning passed. Nothing happened.

Penelope was frustrated. She had done everything right. She had gotten up early, got her boat and her fishing rod, and even remembered to bring five different types of bait. She had, however, forgotten to bring a snack for herself. Dejected and very cranky, Penelope rowed her boat back to shore. Her toes squished through the sand. Her head hung and her eyes stung with tears. Why hadn’t anything happened? She had done everything right. Penelope would never become a pirate now.

“Hello, Penelope!” cried an exuberant Captain Phillips. “How are you today?”

Penelope was too sad to pretend and told Captain Phillips about her day and how she had failed to reach her goal. How she couldn’t even manage to get ANY fish to take a nibble from the bait.

“So you see,” Penelope finished, “I failed. I will never get to be a REAL pirate now.”

“Oh, Penelope! That’s not how it works at all. It’s not about what you do. Your identity is found from something deeper than what you do with your hands. It is found in the King. You see, King Elyon is so wonderful that he sees you, wants you and loves you just as you. You don’t have to catch the huge fish to prove anything.

Who you are informs what you do. You are of great value. You can, for sure, in that be confident.”

“Even better,” replied the Captain. “You get to realize you are much MORE than that. You belong to King Elyon.”

1. Why was becoming a pirate so important to Penelope?

2. How did she feel when after doing everything right, nothing happened? Has that happened to you?

Princess Priscilla is obsessed with her crown. It proves she’s a princess and everyone knows that princesses aren’t really real without their crowns. The glittery jewels sparkle so in the sun. They are happy when you do not feel happy or sparkly. They are also rare. You can’t just look down and find a glittery stone anywhere. These aren’t ordinary rocks!

Her crown was important.

One beautiful summer day, Princess Priscilla, with her glittery crown, decided to go on a picnic. She decided to have a picnic with a capital “P.” Priscilla gathered up popcorn, pickles, pizza, peanut butter, peaches and anything she could think of and stuffed it into her picnic basket. She wrapped herself in her favorite purple boa and set off to find Penelope Pirate, her best friend.

Penelope, who had just became a pirate, was ecstatic at Priscilla’s suggestion of a picnic and suggested that before they eat they play a game. So, when they arrived at their favorite picnic spot – on a hill overlooking the ocean – they decided on playing a game of hide and seek.

“That’s NOT fair,” complained Princess Priscilla, “You didn’t give me a chance to find a good spot.”

“No. It’s your crown! I can see it over the bushes. It gives you away every time!” replied Penelope.

“Oh. I don’t know. I can’t give up my crown. It’s what gives me my special sparkle.” Priscilla tried to reason with Penelope but eventually she resigned herself to take the risk of taking off the crown.

The crown was placed on a smooth rock in plain sight and glittered beautifully in the sun. It was hard to take your eyes off of it, but the girls played and picnicked; giggled and romped around in the sun. At the end of the day, they packed up their picnic and toys. They set off for home.

That evening Priscilla could barely keep her eyes open. She was very tired from such a great day. She had so much fun running around with her friend. Priscilla, as it turns out, is excellent at hide and seek. She’s also very good at climbing trees. Priscilla is also a caring friend. At one point, Penelope fell and cut open her palm. It was very painful and Penelope was distraught. Priscilla gently cleaned the wound and put a purple band aid on it.  There was so much more to Priscilla than her crown.

“Wait…” Horrified, Priscilla stared at herself in the mirror as she prepared for bed. Suddenly, those things didn’t matter. Something very, very important was missing.

Where was Princess Priscilla’s crown?